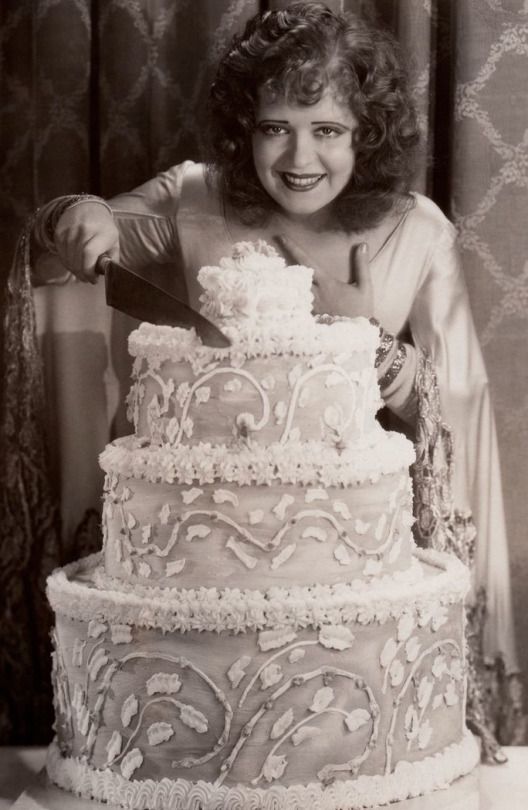 “I’m a curiosity in Hollywood. I’m a big freak because I’m myself.” – Clara Bow

“The girl…blossomed in a mud puddle,” wrote Stephen Crane of his eponymous heroine in his 1892 novel Maggie: A Girl of the Streets.

If the term “It Girl” makes you think of spoiled blonde socialites clutching yappy little Chihuahuas while spilling out of stretch limousines, you may be surprised to learn that the original “It Girl” was born 114 years ago in a Brooklyn tenement, in a neighborhood populated by prostitutes, dope peddlers and assorted criminals of both the soft and hard core variety. In fact, Clara Bow was not expected to live at all. Her mother went into labor during a brutal heatwave which shot the infant mortality rate in the tenement district up to around eighty percent. Clara was the third child of Robert and Sarah Bow; their first daughter had died three days after her birth while their second child lived for only two hours. When Clara Bow was born, her impoverished young parents were so certain that she would not survive that they didn’t even bother obtaining a birth certificate.

But not only did Clara survive; she thrived.

A lonely child who was insecure about a slight speech impediment, Clara found comfort in a new medium which was quickly transforming the world and shaping the American Dream: the movies. After being forced to drop out of school to support her family by working a number of odd jobs which included slicing buns at a hotdog stand on Coney Island, Clara entered the 1921 Brewster Publications’ Fame and Fortune Contest, publicized in her favorite magazine Motion Picture Classic. She would go on to win the contest but Clara still had a rough road ahead of her: “I wore myself out going from studio to studio, from agency to agency, applying for every possible part. But there was always something. I was too young, too little, or too fat. Usually I was too fat,” she would say years later. In 1925 she became a household name, playing a flapper “jazz baby” in The Plastic Age. “She has eyes that would drag any youngster away from his books,” the New York Times swooned in their review of the film. Her performance in the movie It (1927) as a plucky shop girl, who cuts up her work dress into a gown for a night out at the Ritz, catapulted her to both stardom and immortality as the original “It Girl”.

Before Clara, film actresses were usually pythoness-like vamps (think Theda Bara) or sunny, Peter-Pan-like eternal children (such as Mary Pickford, who was still playing child roles well into her early 30s). Audiences of the roaring 1920s – giddy with bathtub gin and inspired by a burgeoning sexual revolution – were hungry for a new kind of movie star – someone wholesome but sexy, fun loving yet sweet – in other words, the dream-girl next door and there she was: Clara Bow, gleefully teaching the “high-hats” how to “do it up right” at Coney Island in It (1927). But Clara, who privately struggled with mental illness, hinted that the dream was just an illusion:

“All the time the flapper is laughing and dancing, there’s a feeling of tragedy underneath,” she said. “She’s unhappy and disillusioned, and that’s what people sense. That’s what makes her different.”

The titles of films such as Red Hair (1928) and Dangerous Curves (1929) speak to her physical appeal but the curvaceous, flaming haired beauty was one of the most innovative actors of her time. “She danced even when her feet were not moving,” said the founder of Paramount Pictures, Adolph Zukor. “Some part of her was always in motion, if only her great rolling eyes.” Indeed, I would argue that Bow’s true successor in Hollywood was not Jean Harlow but rather James Cagney – an actor who shared Clara’s un-containable energy and fluidity of movement (what a shame that Cagney and Bow never starred in a film together!).

One of the most aggravatingly prevailing Hollywood myths is that Clara Bow was a casualty of the “talkies” (sound films). Nothing could be further from the truth. In fact, her “talkies” were, if not all critical successes, than at least financial ones: audiences still packed the theatres in such a capacity that police officers were often needed to control the “It Girl” hungry masses. Furthermore, Bow’s sultry Brooklyn accent was a perfect match for the snappy, streetwise dialogue of the early sound films. In their review of Bow’s first talkie The Wild Party (1929), The Brooklyn Daily Eagle stated that Clara’s voice “records fairly well, she speaks her lines realistically enough, and while the dialogue is pretty terrible, that certainly is not her fault. You’ll probably want to ‘see and hear’ Clara Bow,” the reviewer concluded positively and audiences certainly did. As late as 1932, the Canadian Globe newspaper was still of the opinion that “Clara is an intriguing little vamp.”

The truth is that audiences never left Clara; rather Clara, terrified of the microphone and unhappy with the new, still primitive, sound technology which limited her movement as an actress, left Hollywood on her own terms to become a full-time mother and homemaker. “I don’t wanna be remembered as somebody who couldn’t do nothin’ but take her clothes off,” she said after her final film Hoopla (1933). “I want somethin’ real now.”

But Clara was always “somethin’ real”. And still is. In the WW1 action drama Wings (1927), Bow surprises Charles “Buddy” Rogers by popping up between the legs of a pair of old-fashioned Victorian style bloomers hanging on a clothesline. This scene exemplifies the spirit of Clara Bow: a fresh breeze of modernity breaking through the stuffy constraints of the past.

In 2018, The Toronto Silent Film Festival screened Wings (1927) at the Fox Theatre on a Saturday afternoon. The theatre was packed with patrons of all ages (including children).

Clara Bow still has “it”.

Recommended Reading: To learn more about Clara Bow, check out Clara Bow: Runnin’ Wild by David Stenn. It is the definitive biography of the original “It Girl”.