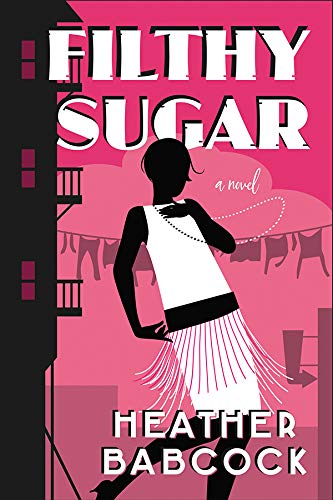 My debut novel Filthy Sugar is now available with Inanna Publications! I thought I’d share a short excerpt with you on this lovely Friday morning.

Clad in his trademark checked suit and comedy derby, Brock belts out “Highballin’ Hard Times,” a song he wrote to commemorate the one-year anniversary of the repeal of Prohibition. A row of chorines dressed up as nineteenth-century saloon girls dance the can-can as I bathe centre stage in an elephantine cocktail glass filled with real champagne.

Humming along with Brock’s booze tune, I joyfully kick my legs out towards the Apple Bottom’s newly installed mirrored ceiling.

“My pockets are empty but my honey’s got money!”

I dunk my head under the golden liquid, not caring if my hair gets sticky.

“As long as I’m with her all my days will be sunny!”

I take a generous gulp of fizz water before coming up again for air. Happy and dizzy, I shake my tassels at the mirthful audience, who roar their approval. I wonder if Mr. Manchester is in the theatre tonight. Just the thought of him watching me like this, with my wet, near naked body glistening under the hot lights, excites me. I have only ever known one man “in the biblical sense”: Guy Bacon, a rather plump banker, eleven years my senior, whom I had met while taxi dancing. I had not found Guy particularly handsome or interesting, but he was very persistent; I was kind of bored. So, one evening, after he had spent all of his tickets on me, I agreed to go for a ride down to the lake in his cherry-red Chevrolet Sports Cabriolet.

It was late spring and the nights were still very chilly. I knew that the beach would be deserted; a fact that, undoubtedly, Guy was also aware of when he stopped his car by the boardwalk and suggested an evening stroll. Walking hand in hand with Guy, my wine-coloured dancing shoes slung over my shoulder, my world seemed as blind and as certain as the moon. Guy took me in his arms and pointed up at the ink-black sky.

“See those stars?” he whispered. “I’ll buy you one. I’ll buy you the whole sky full just to see you shine.” He said the words mechanically, as though he was reading them out loud from a script. Playing along, I put my arms around his neck as he gently pushed me down onto the sand. I was so worried about getting my dress dirty though that I must have forgotten my lines, because moments later, after he had emitted what was either a groan or a whimper, Guy squinted down at my face and asked me why I wasn’t crying.

“I thought you were a virgin.”

The truth was that I hadn’t felt anything that night. Neither pleasure nor pain. Warmth, excitement, desire: these feelings were not to be found on the beach with Guy, but rather over Mr. Manchester’s knee: my body at the mercy of his hands.

“Cause we’ve got highballs and hard times! Diamonds and Breadlines!”

Brock crosses the stage and hands me a martini glass filled with a thick pink liquid.

“Ladies and gentlemen,” he turns back to the audience and raises his own glass. “Let’s have a toast! To the tastiest dish at the Apple Bottom, our very own Golden Delicious Girl, Miss Wanda Wiggles!”

Want to read more? 🙂 You can pick up some Filthy Sugar of your own here: